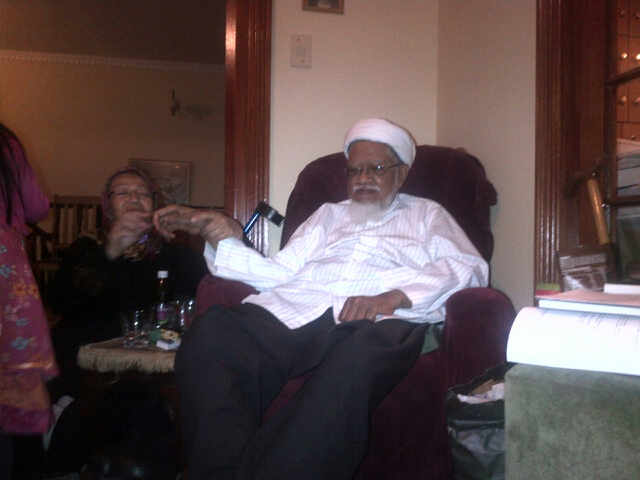 One of the things that we learn in tariqah is that one is not capable of doing things without Allah’s support.  We must remember that.  I am not capable of doing anything, of even delivering this speech, without His support.  Sometimes Allah grants His support through other people, through pious people.  So I say, “O my Lord, let these pious people be present to give me the kind of support I need.”  One might say: “But must support be through others?”

Let me come to what I want to talk about.  In many lectures I have explained the story of Sayyiduna Umar (r.a.).  In this account his eyesight travelled thousands of kilometers.  He also called out and his voice travelled thousands of kilometers.  The question that I always ask, “Could his voice have travelled further than those thousands of kilometers?  Could it have travelled to China?”  Well, Mawlana Shaykh Nazim says that these people can see extremely far and these voices can travel extremely far.  Sayyiduna Umar (r.a.) demonstrated to us his Wilayah.  He was a Wali and he demonstrated that without being aware of it, of course.  He did not do it deliberately.  That’s the one thing.  I want you to keep that story in mind.

Now, on Thursday evening I lectured in Steenberg and I explained to the ladies there certain matters with regard to the heart.  In a new medical field called neurocardiology, the study of the nervous system of the heart, it was discovered that the same type of cells that are found in the brain are also found in the heart.  The nervous system of the heart is called “the little brain” and it can do complex analyses just as the brain.  It also receives information and can make changes to that information.  It was also determined that when two heart cells are placed near to each other in salt water the two cells will continue to beat but will do so in unison.  This is called entrainment.  Entrainment was first noticed with swinging pendulums.  All the pendulums will swing in unison with the rate of the largest of them.  It appears that entrainment can also function in a congregation with the heartbeats of the people following the heartbeat of the most pious amongst them.

Certain experiments were conducted in the Akbar Clinics in the United States of America and also at the University of Khartoum on the impact of Qur’anic recital on the heart.  At the Akbar Clinics they had three (sample) groups.  The one group was Muslims who understood Arabic.  The second group was Muslims who did not understand Arabic.  The third group was non-Muslims who did not understand Arabic.  They recited Qur’an to the three groups.  While they were reciting they were taking readings of heartbeats, blood pressure, and muscle tension, and they noticed that the Qur’anic recitals had an impact on the blood pressure, the beating rate and the muscle tension of the hearts.  It was the most amazing thing because there were people who did not understand the Qur’an at all and this happened.  They then decided to change the experiment.  They decided to recite verses to do with punishment.  In all the cases the rates of the heart beats went up.  The people did not know what those verses were about.  The blood pressure went up.  When verses to do with reward were recited the pressure came down.  Many of them did not understand Arabic.  How is it possible that the hearts of people who did not understand Arabic responded when Qur’anic verses to do with punishment and reward were recited to them?  At the University of Khartoum the effect of Qur’anic recital on patients with high blood pressure was measured, and it was found that the pressure decreased with the recital.

Recently a psychologist from the Netherlands, a Prof van den Hoven, announced his discovery about the effect of reading the Qur’an and repeating the word “Allah,” both on his patients and on normal persons.  The Dutch professor confirms his discovery with studies and research applied on many patients over a period of three years.  Some of his patients were non-Muslims, others could not speak Arabic and were trained to pronounce the word “Allah”.

Let me just change the story.  You know now about Sayyiduna Umar (r.a.).  You know now about what can happen with our hearts.  You also know we are doing work in the black townships and in all those places.  Every week people become Muslim with the minimum, the barest minimum understanding of Islam.  One lady was asked what she knew about Islam and she said: “I only knew the word Allah.”  She only knew the word Allah and she decided to become Muslim.  There’s one lady who was very upset because she had gone to the mosque one day because they provide food there, and this man “in the dress” was telling her that Nabi Isa (a.s.) was not the son of God.  She was very upset.  She went the next day with the express purpose of dealing with this man “in the dress”.  But when she came there they were busy with the dhikr and she remained.  This story she tells herself.  She said after the dhikr she went home and the word Hu (He) remained in her mind the whole time.  She was so sad.  She didn’t know what was wrong.  The next Sunday she recited Shahadah with a minimum understanding of Islam.  What went on?  There are two ladies.  They are mutes.  They became Muslim.  I don’t even know whether they knew anything about Islam.  I had to import two ladies who could do sign language to recite the Shahadah to them.  What is happening?  Allah says that He is the

(Muqallibul qulub: the Changer of hearts).  He changes hearts.  Remember this!

In the black townships, what do we do with the people?  We don’t preach to them about Islam.  We don’t say that there is one God.  We just sit there and make dhikr and then they become Muslim.  You may ask: “You mean these people hear the word ‘Allah’ and then they become Muslim?”  Yes!  It is an unbelievable phenomenon that is taking place there.  I want you to try to understand that.  I want to end off now.  We ask Allah to give to us an understanding of our religion.  We must put aside a few minutes every day for tafakkur, and we ask Allah to make us more silent people.  Those of us who are teachers or lawyers or business people should put ourselves under control.  We need silence in our lives.  We all need it.  We ask Allah for that with the blessings of Suratul Fatihah … 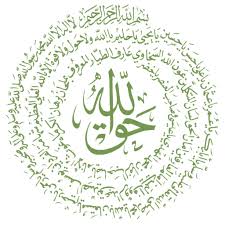